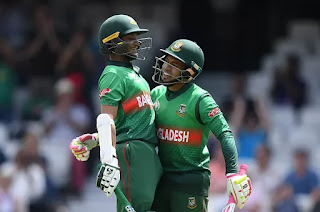 Super Sunday was exciting upto now as we all expected as Bangladesh started their World Cup Campaign in a remarkable fashion.

It all started with South African captain winning the toss and choosing to bowl first.Being put into bat first Bangladesh started really well with 60 runs opening partnership.But lost 2 quick wickets of both openers.

Then experienced batting from Shakib and Rahim almost took the game away from South Africa with good finishing touch from the rest and ended up at 330 at the end of 50 overs.

Highest scorer for Bangladesh was ever reliable Rahim who scored 78 and Shakib added on 75.

South African bowlers were almost clueless but Tahir,Morris and Phehlukwayo managed to take 2 wickets each.

Target of 331 looks like a mountain to climb for South Africa who does not have a very good record in World Cup tournaments with handling pressure.But still disciplined and aggresive batting effort may help them to have a hope on this in a good batting pitch.

You can watch whether South Africans will be able to chase this down live on our score box now.
- June 02, 2019