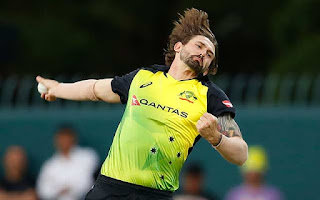 Kane Richardson had a tough time recently and had to stay from the Australian side  in their limited over series in which they were able to beat India at their home comfortably.

He was included in the T20 side which was touring India and missed out the series due to a side injury which he picked while preparing for the 1 st T20I.But he has been able to recover from the injury and is eagerly waiting to join the Australian Team in ODI series against Pakistan .

'' I thought I was done for the season ,So it is always nice to get a positive and be able to comeback and play some sort of cricket'' Richardson express his ideas in Dubai.

Australia is set to play 5 match ODI series in Pakistan and Richardson is hopeful that Australia will continue their winning momentum in their final preperations for the World Cup.

He additionaly said that all the players are set to welcome Warner and Smith Duo back after their Ban which is set to end on 29th March.
- March 20, 2019