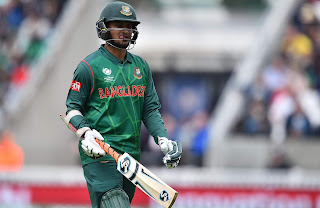 Shakib Al Hasan who is one of the main All rounders in Bangladesh team is likely to miss out the limited over series and Test series which is set to be played in New Zealand due to getting an injury in his left arm ring finger .

He was injured due to taking a blow from Thisara Perera in the Bangladesh Premier League Final which was played last friday.

As per the medical officers the affected area has to be immobilised for 3 weeks and additionally he will have to get some more recovery time to get back on the field.

With the current situation he is likely to miss out both Limited over series and Test series in this crucial series which will be one of their last chances to get prepared to the ICC World Cup.

Bangladesh team did not have a very good record previously in New Zealand and this will be a good oppurtunity to them to create history and go to the Worldcup with confidence.
- February 10, 2019