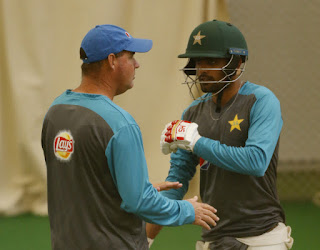 Babar Azam who is one of the best Batsman in current cricket world had a very good outing yesterday in spite of Team loosing the match by a close margin of 7 runs.

He was able to score 90 runs off just 58 balls which gave lots of hopes to Pakistan Fans before he was dismissed.

But Pakistan Head Coach Mickey Arthur says that is not the best which Babar had to offer and he also said that:

''I have never doubted Babar.I said two years ago that he was going to be that good.''

In additionally he said that;

''The exciting thing is that we haven't seen the best of him yet.He is going to get better and better.''

Babar Azam has been one of the highest run getter in T20 format after he was introduced to the format and he has scored 1159 runs in 28 matches at an average of 55.19 .

Pakistan Head Coach was not hesitant to say Babar will be as good as Virat Kholi before even he was introduced properly to International stage and he looks on the way to prove his statement.