Johnson name Maxwell as the Captain for the Worldcup 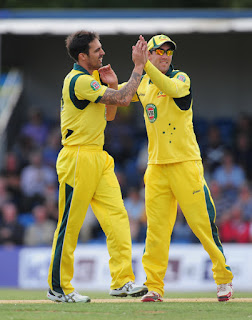 Australia recently suffered ODI series loss to India by 2-1 margin and with World cup coming up this has created enough doubts on the ideal combination of cricket Australia going into the Worldcup.

In the meantime retired fast bowler Mitchell Johnson has named his 15 member Squad for the Worldcup.

Surprisingly he has named Glenn Maxwell who was in and out of the ODI team as the Captain of the squad by saying the pressure built on current captain Aaron Finch as an opener will be released if Maxwell will be appointed as the Skipper.

Johnson has also said that captaincy has helped Maxwell to mature as a cricketer when he was given the oppurtunity earlier.Johnson has clearly seen his leadership abilities in IPL when they played together.

But he has also said that the current Captain Finch should be in the squad as an opening batsmen considering his good performances in England previously.