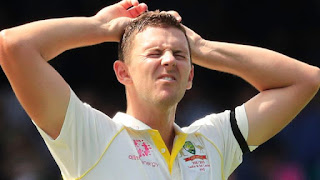 Josh Hazlewood who is one of the main bowlers of Australian side is set to be ruled out of the series between Sri Lanka and Australia due to back injury.

The 28 year old who has picked up 164 wickets in Tests has been suffering with injuries throughout his career.

He has also been rested in the ODI series between India earlier.However the management  is hopeful of him being available to the Worldcup which is scheduled to start in few months.

He has been replaced by 22 year old Jhay Richardson who had a very good outing against India in ODI series.

The series will consist of two test matches and 1 st Test will start on January 24th at Gabba and the second test will be started on 1 st of February at Canberra.
- January 19, 2019