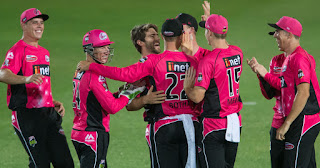 It was a great day for men in pink Sydney Sixers as they were able to get a huge win by beating Brisbane Heat by 79 runs.

Earlier in the match Heat won the toss and decided to put Sixers into bat.Sixers accepted the invitation with both hands and added on a good score of 177 for 7 wickets in their 20 overs.

James Vince was the highest scorer for Sixers as he scored 75 runs off just 46 balls.

In reply Brisbane Heat did struggle to get any kind of momentum and they were just bowled out for 98 runs.

Sean Abbott and  Tom Curran took 3 wickets each to get Sixers a very comfortable win.

Player of the match was James Vince.