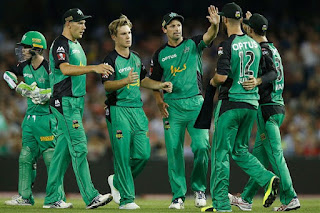 It was another great day for Stars as they were able to get the 6th win of the season by beating dangerous Strikers.

Earlier in the day Strikers won the toss and decided that they will invite Stars to bat.Accepting the invitation Stars were able to get a strong score of 167 runs on board by loosing only 2 wickets.

Ben Dunk was the star performer for Stars in batting as he score 72 runs off just 53 balls.Marcus Stoinis helped him by scoring 53 runs off 45 balls.

In reply Strikers were only able to add on 123 runs by loosing all their 10 wickets and that helped Stars to a big win by 44 runs.

Plunkett,Stoinis and Bravo took 3 wickets each to help Stars to get a such a good win to get them on to top of table.