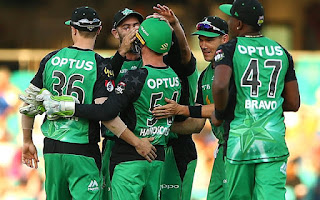 It was a very good day for Melbourne Stars as they were able to get the second win in the tournament by beating the other Melbourne based franchise Renegades.

Earlier in the day they won the toss and decided they will bowl as most of the teams did so far.

Putting into bat first Renegades were able to add on only 149 runs to their score board in their 20 overs by loosing  9 wickets.

In reply Stars easily chased the score down in 17.5 overs by loosing only 3 wickets .

Star player for the Stars in their chase was Marcus Stoinis who scored 78 runs off just 39 balls to get them a comfortable win.

Captain Glenn Maxwell helped their cause with 33 runs off  22 balls.

With that win Stars get on to the 3 rd place of points table and total match summary is as follows: