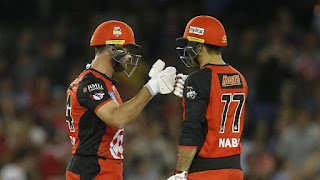 Renegades takes another win to make it 5 out of 9 as they beat Sixers by 7 wickets to get a very comfortable win.

Earlier in the day Renegades won the toss and decided they will field first as most of the teams did upto now.

Being put into bat first,Sixers were only able to add on 115 runs to the Scoreboard .

Mohammad Nabi showed a pretty special performance by taking 4 wickets for just 25 runs inorder to restrict them for a lower score.

In reply Renegades acheived their target of 116  in just 13 overs and with 7 wickets still in hand.

Player of the match was Kane Richardson for his 3 wickets for 26 runs.