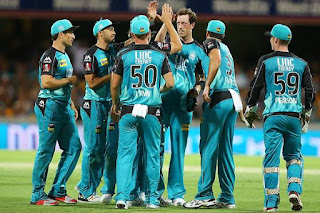 Brisbane Heat was able to show a very dominant performance here at Geelong to to take their 3 rd win in the season as they were able to beat Renegades by 101 runs.

Earlier in the day Renegades won the toss and opted to bowl and it did not result well as Heat was able to add on a huge score of 192 runs for 4 wickets on the board .

Brendon McCullum and Chris Lynn played a crucial part to to get Heat on top as both of them were able to add  69 runs and 66 runs respectively.

In reply Renegades were only able to add on 91 runs on to their Scoreboard and it resulted a very good win for Heats by 101 runs.

Max Bryant was named as the Player of the match for his 44 runs of just 24 balls and good fielding effort.