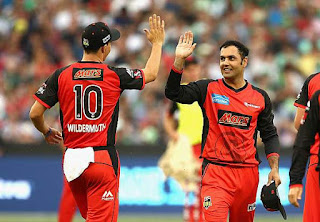 Melbourne Renegades made it 4 wins out of 7 today with a very Comfortable win over Heat here at Brisbane.

Earlier in the day Renegades captain Tom Cooper won the toss and decided they will bowl first and was able to execute their plans very well as they managed to limit powerful Heat attack for 144 runs in their 20 overs.

In reply Renegades acheived their target of 145 in just 15.4 overs with 8 wickets left in hand.

Sam Harper was the star performer for Renegades in their comfortable chase as he scored 56 runs off just 40 balls.

With that win Renegades get on to the second place of points table as Heat remain in 7 th place with only 2 wins under their name.