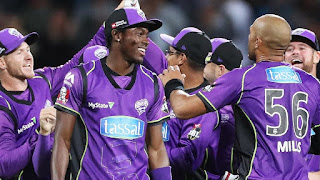 It was a very good day again for the table toppers Hurricanes as they were able to get a very comprehensive win over the Heat in their own backyard.

Heat who started batting after accepting the invitation by Hurricanes were only able to add on 145 runs on to the board irrespective of the century partnership by  Ross and Peirson.

It was always a below par score and Hurricanes did not waste much overs to chase this down as they chased it in just 14.2 overs by loosing only 1 wicket.

D Arcy Short was the star performer for Hurricanes in chase as he was able to score 68 runs from just 41 balls.He received the Player of the match award.