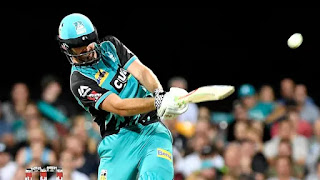 Welcome to the 44 th match of the season as Heat takes on Hurricanes here in Hobart.Earlier in the match Hobart Hurricanes won the toss and decided they will bowl first.

Accepting the invitation from the Hurricanes,Heat could not get into a great start as they lost 4 early wickets for just 27 runs due to amazing bowling from Hurricanes.

But Alex Ross got together with Jimmy Peirson inorder to take Heat into a respectable score by building up a century partnership.

Alex Ross was the senior partner of the partnership as he scored 62 runs of 35 balls.Pierson helped him by scoring 50 runs off just 48 balls.

At the end of the 20 th over of the match Heat managed to get a score of 145 runs on the board by loosing 6 wickets.

For Hurricanes Faulkner,Archer and Moody was able to 2 wickets each.

Hurricanes need 146 runs to win from 120 balls at a run rate of  7.3 runs per over  and we reckon it is still a below par score and Heat will have to bowl extremely well to defend this score on this pitch.
- January 29, 2019