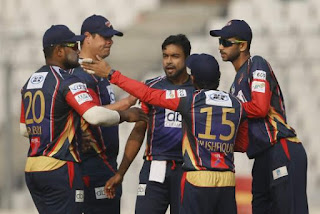 Chittagong Vikings were able to get their  4 th win out of their 5 matches played by beating Khulna Titans yesterday .

Earlier in the match Titans won the toss and decided that they will put Vikings into bat.

Accepting the invitation of the Titans,Vikings were able to add a huge score of 214 runs to the scoreboard by loosing only 4 wickets in their 20 overs.

Yasir Ali and Mushfiqur Rahim contributed with half centuries to get  a big score on board.

In reply Khulna Titans were only able to add on 188 runs to the scoreboard by loosing 8 wickets.

With that Vikings were able to get a win by 26 runs and player of the match was Vikings captain Mushfiqur Rahim.