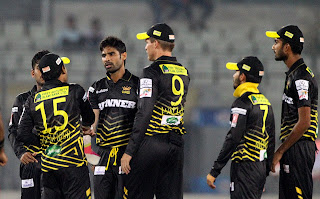 It was another low scoring clash here at Sylhet but this time Rajishahi Kings managed to end up on the winning side by beating Dhaka Dynamites.

Kings who won the toss earlier in the match were not able to add on a very big score on the board as they only added 136 runs on board for 6 wickets.

Marshall Ayub was the highest scorer for Kings as he scored 45 runs off just 31 balls.

But they bowled pretty well to limit Dynamites to a lower score of 116  with an amazing bowling performance from Arafat Sunny and Mehidy Hasan who took 3 wickets and 2 wickets each.

Player of the match was Arafat Sunny for his amazing bowling effort and full match summary is as follows: