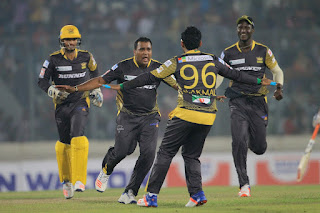 It was a thrilling encounter here at Chattogram as Vikings took over Kings in the 32 nd match of the season.

Vikings won the toss earlier in the match and invited Kings to bat first on a very good pitch.Accepting the invitation Kings got a good score of 198 runs in their 20 overs by loosing only 5 wickets.

Johnson Charles was the highest scorer for Kings as he scored 55 runs off  just 43 balls.

The reply was equally good by the Vikings but they ended up at 191 runs in their 20 overs by loosing 8 wickets and they were finally short by just 7 runs.

Player of the match was Mustafizur Rahman who helped Kings to defend 198 by producing an amazing spell of 3 wickets for 28 runs.