Australian All rounder out of 1 st ODI against India 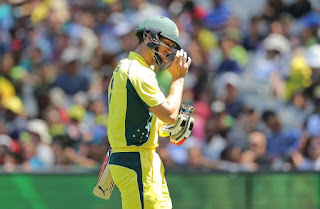 Young Australian All rounder Mitch Marsh has been kept out of the 1 st ODI against India which is scheduled to be played on next Saturday( January 12th).

He has been kept out of the Squad due to he has been hospitalized and was getting treatments for Illness for last few days.

Ashton Turner who is currently participating in Big Bash League has been named as his replacement for the squad.

Turner has played for Australia before as a middle order batsmen who can bowl occasional off spin against Sri Lanka in a T20 series which consisted of 3 matches in 2017.

They lost that series by 2-1 margin and he could not be seen in International arena after that.

Langer who is the Australian head coach has got high promises on him regarding his ability to play as a finisher.

He also highlighted Turner as one of the best runners between wickets.

Turner is the current captain of Perth Scorchers in Big Bash League 2018/19 and reputed as a very good fielder and good finisher.
- January 10, 2019