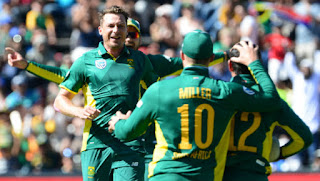 It was an inning with Ups and Downs by Pakistan in the series decider here in Cape town.

The day started with South Africa winning the toss and deciding to bowl first after their failure in last match.

Pakistan lost Imam for just 8 runs but they were able to get over the 100 runs mark with just 2 wickets down .But after that they lost wickets regularly and that did not allow them to get the required momentum into the inning.

Highest scorer for Pakistan was Fakhar Zaman who got 70 runs off just 73 balls.Imad Wasim helped them to get to 240 at the end of inning with unbeaten 47 runs contribution.

Pretorius who was the new addition to the team bowled pretty well and got 2 wickets for 46 runs and Phehlukwayo contributed with 2 wickets for 42 runs.

Watch whether South Africa will be able to get a series win from our Live Score Box now.