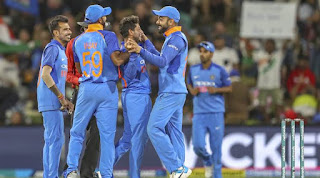 Another day and another win for Team India.Not only another win ,they have already clinch another overseas series win with that win with two matches yet to go.

Match started with New Zealand winning the toss and starting to bat first.Indian bowlers got a great start again as they did not let New Zealand batsmen open up their arms freely.As a result they world bowled out for just 243 runs at Bay Oval.

In reply India only needed 43 overs to get a win as they acheived the target with 7 wickets still in hand.

Experienced Rohit Sharma and Virat Kholi lead the chase as they scored 62 and 60 respectively.

Each and every batsmen in Indian top order contributed well to acheive the target comprehensively.

With that win India has already got another series win with 2 matches to go and the win was historic as they were able to acheive this mark of winning an ODI series in New Zealand only after 10 years.

Player of the match was Mohammed Shami again and full match summary is as follows: