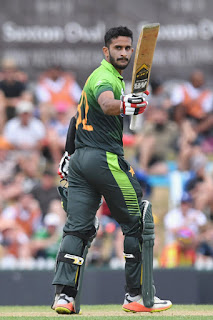 Inning did not progress as expected for Pakistan after they were put into bat first by the South African captain as they were only able to add on 203 runs to the Scoreboard.

Pakistan were in trouble at the begining of the inning as they were 85 for 5 wickets at one stage.

But courageous inning from Hasan Ali who scored 59 runs off just 45 balls helped Pakistan to cross the 200 runs mark.

Captain Sarfraz Ahmed helped him with 41 runs off just 59 balls.

For South Africa Andile Phehlukwayo was the star performer as he took 4 wickets for 22 runs.Shamsi and Rabada was able to take 3 wickets and 2 wickets each.

South Africa need 204 runs to win from 300 balls at a run rate of 4.08 runs per over and Pakistan will have to bowl extremely well to get a win out of this.