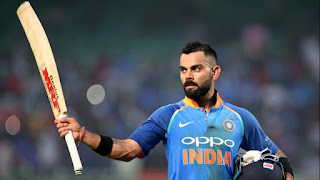 After a defeat in the 1 st ODI,India came back very strongly in the second ODI to level the series going on to the 3 rd ODI.

Earlier in the day Australia won the toss and decided that they will bat first on very good Adelaide Oval pitch.

Australia were able to put on a good score of 298 runs on board with the help of  great inning of 131 runs from Shaun Marsh.

But it was not enough for Aussies as India chased down the target in 49.2 overs and with 6 wickets still left in hand.

Captain Kholi lead the team from the front again as he scored 104 runs and experienced MS Dhoni helped him by scoring 55 runs off just 54 balls.

Player of the match was Virat Kholi as expected.