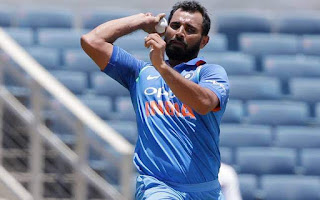 19 Overs are done and dusted here at Napier after New Zealand won the toss and decided to bat first .

India has showed their dominance once again after a very succesful Australian tour as they have taken 4 big wickets of New Zealand top order for 77 runs as per now.

New Zealand has not only lost 4 wickets but also bit low on the run rate per over as they are going only at a rate of 4.05 runs per over.

Batsmen at the middle for New Zealand are Kane Williamson who is on 27 and Henry Nicholls who is on 1.

Mohammed Shami and Yuzi Chahal was able to take 2 wickets each as per now and Indian bowlers are showing up a dominant performance here compared to last few tours.

Average 1 st inning score here at Napier is 244 and New Zealand will have to atleast get over 270 from here to challenge strong Indian batting attack.
- January 23, 2019