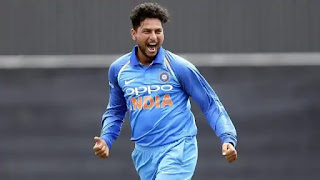 India's dominance in ODI format has reached a new level now as they were able to bowl out New Zealand for just 157 runs here in Napier.

Earlier in the match captain Williamson decided to bat first with the expectations of getting a good score on the board.But things did not went for them as expected as India were able to take regular wickets and did not let most of the New Zealand batsmen bother the scorers a lot.

Kuldeep Yadav was the star performer for India as he was able to take 4 wickets for 39 runs.Mohammed Shami and Yuzi Chahal helped him with 3 wickets and 2 wickets each.

Watch whether India will be able to acheive the target with analysis over each delievery from our Live Score Box now.
- January 23, 2019