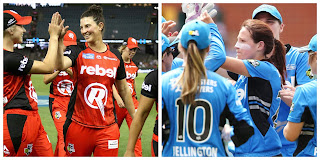 It is the 7th match of WBBL as Renegades takes on strikers here at Melbourne.

Strikers won the toss earlier in the day and opted to bat first.

They ended up scoring 153 runs loosing just 7 wickets after their 20 overs going at a run rate of 7.65 runs per over.

Captain Suzie Bates scored a fine half century(54) for Strikers as Sophie Devine contributed with 39 runs.

Renegades need 154 runs off 120 balls at a run rate of 7.7 runs per over to get their first win in the tournament.

Match summary at Innings break is as follows:

Join with teamdfacto.com for further updates on both live matches of WBBL !
- December 08, 2018