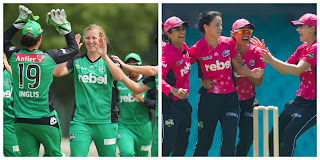 10 overs are done here at  Melbourne as Sydney sixers are 92 for no wicket after choosing to bat first when they won the toss.

Sixers are going at a run rate of 9.2 and at a current run rate their expected score is around 185 runs

Ellyse Perry and Alyssa Healy is hitting it all around the park as Perry has scored her half century just from 33 balls.