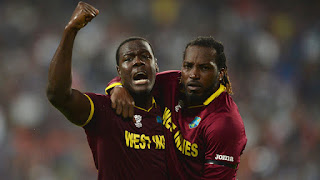 Windies managed to get a series win finally over Bangladesh Yesterday by winning the series decider T20 by 50 runs .

Windies Captain Carlos Brathwaite was very excited after the series win and expressed his view on series after the match by saying;

He also did not forget to say''We made 80 odd runs in two T20 matches in the power play.So,if we show intent,we can get a very good start more often than not.''

Not only that he also praised his young fast bowler Keemo Paul for his magnificent effort of 5 wickets for 15 runs in Yesterday's match.

Not only him but also Shakib Al Hasan ,Bangladesh captain praised his bowlers for coming back strong in the last few overs of the match yesterday to limit windies for 190 runs,

He also did not forget to say that'' So many players stood up in the series,Liton with the bat and Mehidy with the ball.We were good in most areas but we need to improve in few areas'' after the match.

It was a very exciting series with great contest with the bat and ball and finally Windies managed to edge over Bangladesh .
- December 23, 2018