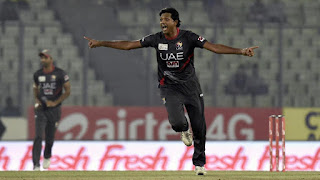 Amjad Javed who has take 42 International wickets for United Arab Emirated in just 37 matches has decided his time is up to give others a chance to play in the Team.

38 year old has announced his retirement by a Official Tweet by saying;

He has also thanked Emirates Cricket,Asian Cricket Council and International cricket council for providing a platform to lead and represent UAE at highest level.

Javed played his final International match against Nepal in year 2017.

He was not only playing the role of a bowler but he recognize himself as an all rounder who averages 19.91 in ODIs and 18.06 in T20s.

We wish him all the best for his life after retirement from teamdfacto.com
- December 23, 2018