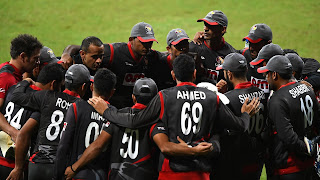 UAE captain Rohan Mustafa,Ahmed Raza and Rameez Shahzad has been suspended by emirates cricket board for eight weeks from international cricket due to violating the players code of conduct and usage of social media during Emerging teams Asia cup.

This suspension has happened due to criticising of facilities at the ground in Karachchi when they were not able to resume the match with Hongkong after rain which has shuttered their hope to play in semi finals.

As per the news Emirates cricket board has suspended the 3 players and also fined and warned about the future conduct.
- December 20, 2018