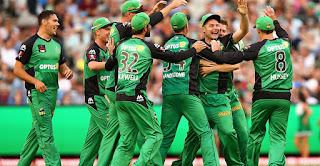 Finally Melbourne Stars managed to get their 1 st win in the tournament by beating Sixers today very comfortably here at Sydney.

Earlier in the day Melbourne stars won the toss and decided to put Sixers into bat first.

But Sixers could not get somewhere even closer to a Par score as they could only get 130 in their 20 overs by loosing nine wickets.

Coleman and Sandeep Lamichhane bowled pretty well  for Stars by taking 3 wickets and 2 wickets respectively to restrict Sixers for 130.

In reply Melbourne Stars reached the targt in just 14.5 overs with 5 wickets still in  hand.

Peter Handscomb who recently joined Stars showed his worth by scoring 70 runs off just 35 balls and  received a well deserved Man of the match title.

Match summary is as follws: