Steve Smith not allowed to play in BPL 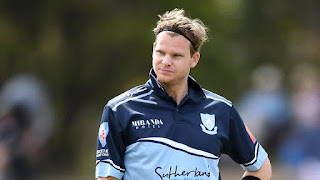 Steve Smith will not take part in the next edition of the Bangladesh Premier League  as Bangladesh Cricket board has not allowed him to play after franchises expressed their reservation over his inclusion saying that he was picked from outside the draft.

Steve Smith was supposed to join BPL in the middle of the tournament as a replacement for Shoaib Malik who will leave BPL for his national duties to play for Pakistan in South African series.

His team mate David Warner will still play for BPL for Sylhet Sixers and also he has been named as the captain of the team.
- December 20, 2018