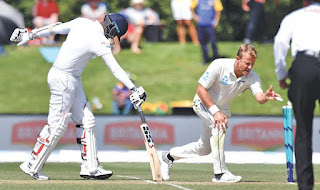 He was unbeaten in second inning in 1 st match and also in  1st inning of second Test.

But as soon as we all started thinking he is back with proper fitness level ,we all were proved wrong as Hamstring problem of Angelo started troubling him again in second inning which made him retire due to injury.

He could never step back to the crease.

Unluckily for Sri Lankans it will not be the only match that Angelo Mathews will not be seen as he has been advised to stay away from the game for nearly 8 weeks and he will miss the two limited over series and 1 st Test against Australia as per the news.

He was not a part of the limited over side due to his fitness issues highlighted by coaching staff and management and he was ready to come back to New Zealand series with some new inclusion to the squad.

But he was a regular part of the Test team and we expect that Dhananjaya De Silva could replace him for the first Test against Australia.