Shakib Al Hasan and Carlos Brathwaite rise up in the rankings 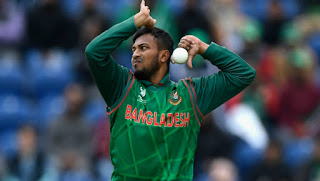 Bangladesh Captain had a very good T20 series with West Indies team despite of his team loosing the series by 2 matches to 1 margin.

With 103 runs in the series including 42 runs in the second T20 which helped them to win the match has helped him to move upto the 37 th position in T20 batsmen rankings.

Not only in batting but also in bowling rankings he has been able to increse his rank upto 7 th position with points gain from 8 wickets in the series of 3 matches.

Shakib is known as one of the best all rounders in current era and ranked at No 1  and No2 position in Test and ODI rankings currently.

With this performance in T20 series he has been able to ensure his position at No 2 now in latest T20I all-rounder rankings.

The opposition captain Carlos Brathwaite has been able to improve his bowling ranking by  8 places to be the 22 nd in the rankings.

But both West Indies and Bangladesh teams are ranked at No 7 and No 10 respectively without any change in positions of  the rankings after the series.