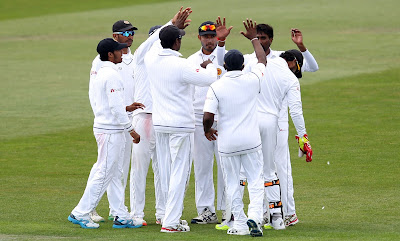 It's nice to start up the New Zealand's tour competitively. When we do look back forward, it wasn't a very ugly performance by the Sri Lankans, especially when it comes to the English series the last two test matches we had played pretty competitively. It was the silly mistakes made the difference at the end of the day. Furthermore, We all know usually New Zealand's tracks are used to pace bowlers. Therefore the average score on New Zealand's pitches around 300. Last test match we hadn't had seen any demons from the track, that's why the New Zealanders did manage to put a score around 500. In Sri Lankan fist innings, they hadn't had read the pitch pretty well plus their foot workings were not quite good too... But still they had managed to put a score to close 300 lead by the experienced player Angelo by putting a score of 83. As an opener Dimuth Karunaratne scored 79 and Niroshan Dikwella put an unbeaten score of 83 at the latter part of the innings had given a reasonable hope for the Sri Lankans. On the other hand, the opener, Tom Latham had proved the way to bat by putting an unbeaten 264 runs plus raised up the New Zealand first innings to 578 and the lead was 296 runs. It was a huge pressure put up by the New Zealanders. It was day 03, probably the last hour, may be the pressure had done the trick by collapsing 03 wickets for just 13 runs. New Zealanders were thinking about a mammoth victory on that day. At the end of the 3rd day New Zealand were filled with a lot of confidence and Sri Lanka were a bit hopeless too... All of a sudden it wasn't to be... the young Kusal and mature Angelo who were playing the day without giving their wickets by putting up centuries respectively. It was a world record too... A day had finished without falling any wickets. On day 05, the playing did progress for just only 13 overs because of the rain interruption. Still Angelo and Kusal were unbeaten on that partnership. It's 274*. It was an excellent performance by the Sri Lankans without giving any chances to the opposition. Still the series is 0-0 looking forward a good second test match on the boxing day.
-Review by Sri Lankan fan Angelo
( Get a chance to express your reviews and ideas on any kind of a cricket match or cricket news on our website by sending your review to teamdfactoadvertising@gmail.com or send a message to our Official Facebook page Team D FACTO sports website and be a part of our family)