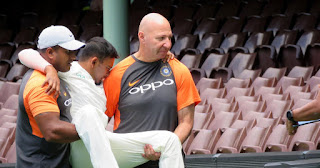 Indian young opener Prithvi Shaw has been ruled out of Australian series due to an injury and as a replacement Mayank Agarwal has been called up to the team.

Shaw is out of the series due to an Ankle injury happened during the practise match when he was trying to take a catch.

Also India has called up for the service of Hardik Pandya who has recovered from his lower back injury to join the team for the boxing day test .

He has been staying away from the game for around 2 months and was expecting to join the ODI side earlier.
- December 18, 2018