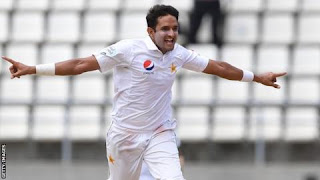 Sad news for Pakistan team before Boxing day test as one of their main players Mohammad Abbas is likely to be ruled out from the 1 st Test against South Africa.

He has been suffering from a Shoulder injury during the New Zealand series and was not able play the 3 rd Test.

Pakistan were hoping him to recover for the South African series but he has not able to recover from it yet.

Also Shadab Khan is also not available for the first test due to an injury .

But Fakhar Zaman is fit again after missing few tests and expected to play the first Test against South Africa.

With absence of Abbas Shaheen Afridi,Mohammad Amir and Hasan Ali will be the options in fast bowling department as per our view and we expect them to play 1 spinner and Yasir Shah is the most likely option as we guess.
- December 25, 2018