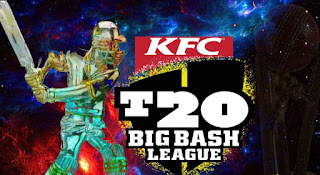 All are set for the eighth edition of Australia's biggest T20 tournament Men's Big Bash League which will start tommorow.

Big Bash League will kick start tommorow in Gabba and eight teams will play as usual.Fifty nine games are set to be played with 14 group games for each team in home and as well as away.

Same like they introduced Zing bails in previous edition,they are set to introduce something new to Cricket world tommorow as they are using bat flip instead of coin toss.

This tournament is always a blessing for the cricket lovers to celebrate festive season with cricket by watching exciting cricket in great scenic grounds.

We promise you to give live updates and live score starting from tommorow until the end on teamdfacto.com.

We invite you all to join with us and enjoy the festive season with us.
- December 18, 2018