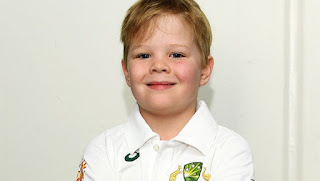 It was filled with aggressiveness and so much exciting moments in last 2 tests.But what we are going to say now will be very emotional if you are cricket fan who loves the spirit of the game.

Australia has named a new member to their squad who is a leg spinner from Adelaide to strengthen their side.

Speciality of him is he is just 7 year old who had a dream to captain Australia one day.

His name is Archie Schiller and he is all set to make his debut for Australia in the Boxing day test just after Christmas.

The little fellow is  suffering from a heart ailment but his dream to play for the country could not be stopped by that.

Little Archie has got to know about his inclusion in the test squad over a phone call by Australian Coach Justin Langer.

He has already started his practise session with Australian squad and he will captain Australia along with Tim Paine in Boxing day test.

We wish our little Archie to have a wonderful game of cricket.
- December 24, 2018