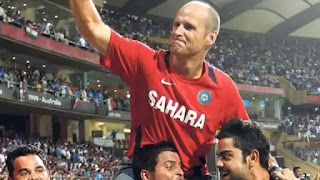 Gary Kirsten who helped India to lift the world cup in year 2011 after 28 years has applied for head coach position of an asia team after a while.

Former South African cricketer has applied for the Head Coach position of India Women's Cricket team which is vaccant after the contract period of Ramesh Powar which ended after the T20 world cup.

His name has been short listed along with the names of WV Raman and  Venkatesh Prasad in order to make a final decision.

He is currently serving as the Head Coach of Indian Premeier League team Royal Challenger's Bangalore and the former South African Cricketer might have a good chance of working with India again as per the news.
- December 21, 2018