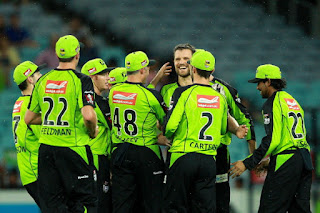 Another day and another win for Thunder as they were able to get their second consecutive win in the tournament by beating  Sixers by 21 runs.

Earlier in the day Sixers won the toss and opted to field first as most of the teams did upto now.

But Thunder grabbed their oppurtunity by both hands and was able to add 169 runs for 9 wickets at the end of 20 overs.

In reply Sixers could only reach 148 runs for 9 wickets at the end of their 20 overs.

Jos Buttler was the the main man for  Thunder as he was able to score 63 runs off just 37 balls and played shots all around the park.

He was judged as Player of the match and rightly so.

For Sixers Tom Curran showed a special performance by hitting 62 runs off just 40 balls and was able to get 3 wickets for 24 runs.