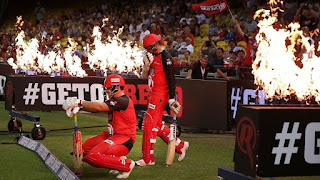 It was a great encounter and thriller match at Adelaide as Renegades were able to get the second consecutive win of the season by beating defending Champions Strikers at their own Fortress.

In reply to a very good score by Adelaide,Renegades got into an aggresive start and was able to continue the momentum throughout the inning .

But it was not so easy as it is said because at one point Renegadesh were 82 for 5 wickets after 11 overs.But fall in wickets did not matter a lot for the strong Renegades batting order as Former Afghan captain Mohammad Nabi and Daniel Christian was able to built 94 runs partnership for the 6 th wicket to get Renegades over the line.

Stanlake and Rashid Khan was able to take 2 wickets each for Strikers.

Player of the match was Daniel Christian.

With that Renegades ensure that they are at top of the points table.

Match Summary is as follows: