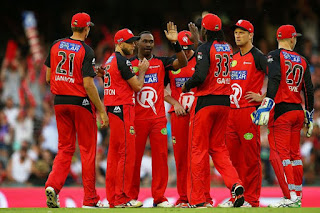 It is the innings break here at Adelaide as Strikers ended up at a score of 174 runs for 5 wickets at the end of their 20 overs.

Earlier in the match Renegades won the toss and opted to field first .

Putting into bat first Strikers lost their opener Alex Carey for 5 runs  and were 63 for 3  in the 9 th over of the inning.

But 104 runs patnership from Matthew Short and Jonathan Wells helped them get over to a respectable score of 174 runs.

Highest scorer for Strikers was Matthew Short who scored 65 runs for his team.

Watch the Renegades chase live on our website now.