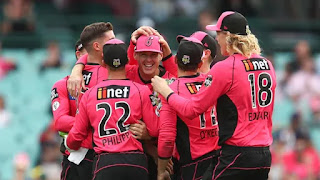 It was a very good day for Sixers as they were able to get the second win of the season by beating Renegades by 33 runs comfortably.

Earlier in the day Renegades won the toss and opted to field as usual.

They bowled pretty well to restrict Sixers for just 132 runs by taking 7 wickets in their 20 overs.

Kane Richardson was the star performer again for Renegades as he took 3 wickets for 22 runs.

But in reply Renegades only managed to score 99 runs by loosing 9 wickets in their 20 overs.

Their batsmen never got the momentum and Special bowling of bowlers like Tom curran who took 3 wickets for 18 runs and Abbot,O Keefe and Manenti who got 2 wickets each made their job harder.

Player of the match was Ben Manenti who took 2 wickets for 13 runs in his 4 overs.