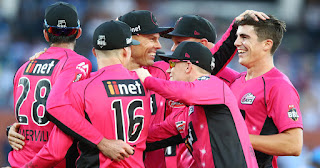 Sydney Sixers takes a win out of it finally with a great performance from both bat and ball to out class Scorchers.

In reply to the Sixers score of 164 it was not a very good Start by the Scorchers as they lost 3 early wickets for just 9 runs in the 3 rd over of the match.

But 99 runs partnership from Ashton Turner and Hilton Cartwright made them go pass 100 in 14 th over to get the target possible to reach.

But Very good death overs bowling by Sixers made them end up at 147 for 8 wickets.

Highest scorer for Scorchers was Cartwright who scored 53 out of 39 before he was run out.

Man of the match was Steve Okeefe for his 3 wickets for 19 runs.