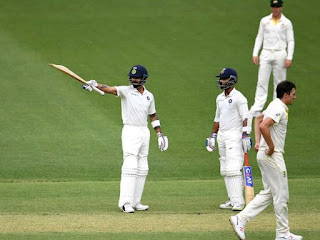 It was a good day for India as they were able to get through the innings with just 3 wickets lost and was able to minimize the deficit to 154 runs.

After Australia added on 326 for the first inning,India was in spot of bother going into the lunch at 6 for 1.

But Pujara,Kholi and Rahane was able to stabilise the inning and ended the day at 172 for 3.

Kholi played well for his unbeaten 82 and Rahane is on 52 at the crease.

Mitchelle Starc took 2 wickets for Australia as Hazelwood was able to take the wicket of  Rahul.

We can say India is on top here and if they can get a first inning lead in this bouncy pitch it will be crucial for the decision of the match.

In Australia's point of view they are 1 wicket away from testing the India's lower middle order which is inexperienced.

Join with us again tommorow on teamdfacto.com for live action
- December 15, 2018