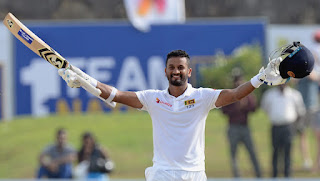 A real Test for Lankans will start tommorow on New zealand conditions in pitches with swing and bounce.

We thought of suggesting the best xi possible for both teams with our analysis on previous performances,Conditions and practise match performances.

Talking about Sri Lankan team lots of changes can be expected after the loss of the team by 3-0 margin to England.

Our openers for the test are Dimuth Karunarathne and Danushka Gunathilaka .Two left hand players who has had some success in these conditons over inexperienced Samarawickrama.

NO 3 place is given to Dhananjaya De silva as we have been talking a lot about him that he is the one who has potential to get the responsibility of scoring and handling the pressure at no 3.

Our no 4 is Anjelo Mathews who scored a brilliant 100 in practise match and who had a succesful England test series.

No 5 is captain Dinesh Chandimal who can strengthen the Lankan middle order.

No 6 is a tough choice but we opted Roshen Silva purely because he has some test form within him over Kusal Mendis and we have an idea that if Kusal Mendis is playing he should bat only in No 3 or 4 positions.

We have selected Niroshan Dickwella at No 7 over Sadeera who has an test average of 15 in 8 innings as we feel best wicket keeper in the squad is him and surely wicket keeping would be crucial here in these conditions with pace and bounce.

As we feel Lankans should go with 3 pacers and 1 spinner for the match with the conditions in Wellington and our 3 Pacers for Sri Lanka are Suranga Lakmal and Lahiru Kumara who had success in South africa and west indies and we select Dushmantha Chameera over Kasun Rajitha purely because of his ability to swing the ball in the conditions.

Our spinner for the match is obviously Dilruwan Perera who is very experienced and had success in practise match.

New zeland who had success in Pakistan series will be expected not to change the combination much except they will use 3 pacers and 1 spinner as we expect.

Our 3 pacers are Southee ,Boult and Wagner and we expect Ajaz Patel to play the spinner's role.

Those are the two teams selcted by us and expected to play tommorow and we invite you all to watch the match live on teamdfacto.com