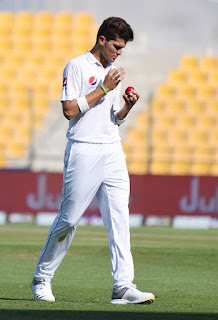 Another testing series for Pakistan is coming back as they are all set to meet South Africa in their home tracks.

Lots of cricket lovers are eagerly waiting for the Boxing day test and we thought of giving you the idea about possible team xi's with the news coming up from dugouts.

At first Pakistan will miss the service of  Mohammad Abbas and Shadab Khan as we mentioned in posts earlier so the 4 bowlers that is likely to play for tommorow's test will be Mohammed Amir,Shaheen Afridi,Hasan Ali and Yasir Shah as we expect Pakistan will go with 7 to 4 ratio of batsmen and bowlers tommorow.

Fakhar Zaman and Imam-Ul-Haq is expected to play as openers tommorow and the possible playing xi for Pakistan is as follws:

South Africa is likely to go with same combination in bowling attack as they will use 3 Pacers and service of spinner Keshav Maharaj.

Probable playing xi for South Africa is as follows: