1 st Test Austalia vs India Live-Pat cummins get the wicket of Kohli for 3 runs-Is cummins trying to prove the statement he made before the series? 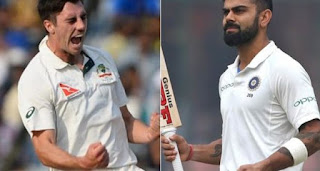 ''I'd say Virat Kholi is not going to get a hundred and we are going to knock them off over here'' This statement was  viral all over the cricketing world when it was said by young  talented aussie pacer Pat cummins going into the Australia vs India series.

Today for the first time Pat cummins met Virat kholi and result was  Kholi caught by Kawaja bowled by Pat Cummins for 3 runs.

India won the toss earlier in the day and opted to bat in Adelaide Oval and currently playing  in  the first session of play at 42 for 4 wickets after 21 overs into the match.

Earlier in the day Rahul,Vijay,Kholi and Rahane were dismissed for 2,11,3 and 13 respectively.

Players at the middle currently for India are Pujara on 11 and Rohit Sharma on 1.

For Australia Hazelwood took 2 wickets while Starc and Cummins got 1 wicket each.

Australia 3 pacers seems troubling India Batsmen a lot but there is long way to go in the match as if india can get over the trouble and build on a partnership they stii can win it for India.

Watch the Cummins vs Kholi battle and India vs Australia battle until the end of series with us on teamdfacto.com with our live updates and live score box.