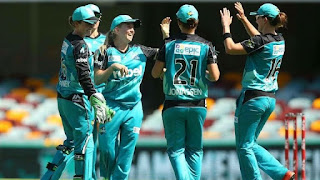 WBBL2018-19 is going to be a promising encounter of Women's cricket starting on 1st December 2018.

We promised you to bring full live updates of the matches through out December and January.Before the start of the series we are introducing all names and stats and schedule of each franchise so you can watch our  updates with better knowledge.

In last two BBL posts we talked about scorchers and strikers and now we are going to introduce you third franchise Brisbane heat who finished 5 th last time.

We will provide you updates of all matches to your finger tip on teamdfacto.com

Schedule,Fixtures and Start time of the whole tournament matches will be informed to you after introduction of teams.

Details of another franchise will be informed to you on our next post on WBBL18-19.