STEVE SMITH AND WARNER TO COMEBACK TO THE SATGE FOR INDIAN SERIES ? 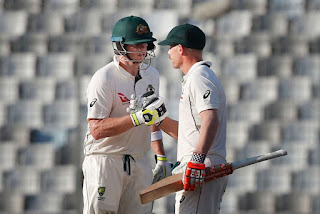 It is been rather a poor show by Aussies after their banning of Captain Steve Smith and David Warner due to ball tampering controversy.

But going into the India series still Cricket Australia has  provided a statement that bans imposed on Steve Smith,David Warner and Bancroft will not be amended before Indian series.

The response was made by cricket Australia for the request made by Australian Cricketers  Association to bring back the trio before original ban would end.